Amor’s shop on Market Hill was at the heart of Southam for several decades. Jasper Amor was born in 1876 in Bromham, near Devizes, in Wiltshire son of an agricultural labourer. 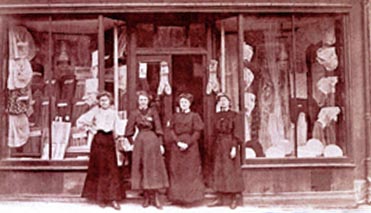 He left that area and in 1905 in Banbury was married to a girl called Fanny. Their only child, Ewart Frederick was born in the Autumn of 1907, but the following August Fanny died. She was buried in Southam church yard.

Amor’s drapery business was quickly established and it is listed from 1908 in Kelly’s Directory. Jasper was married again in 1910 to Gertrude and two children followed: Leslie (1911) and Gwendoline (1913). Leslie later worked with his father as ‘draper, outfitter and salesman’ (1939 register) and Gwen drove their delivery van. (photo in SHC Collection)

When conscription was introduced, 40 year old Jasper enlisted in February 1917 in the Hampshire Regiment. Despite a medical that showed him to be just 5 ft tall and impaired with a hernia, for which he wore a truss, he was sent to France. 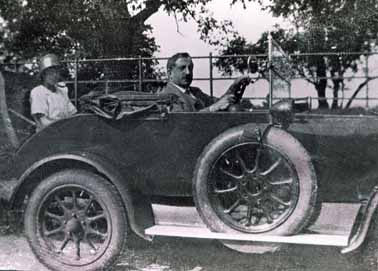 Later he was transferred to 46th Company of the Chinese Labour Corp and had an accelerated promotion to Acting Sergeant. He was awarded the Victory and British medals. In 1919 he was demobbed and returned to his business which prospered during the 20s and 30s.

Here he is pictured in his car. When he died in 1949 he was buried in Southam churchyard.