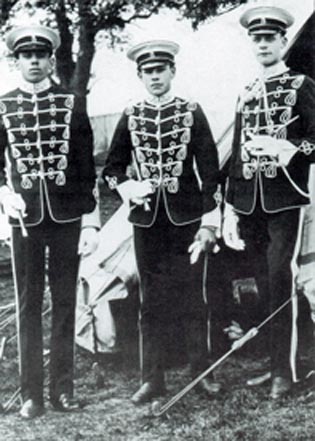 Alfred was the son of Arthur and Harriet Chambers the printers on Market Hill. Like his older sisters Lillian, Violet and Daisy, he worked in the business. He survived being torpedoed as well as the long years of conflict and after the war, in 1922, he married Amy Jeffe and eventually took over the printing and bookbinding business.

Before the war, the unit wore elaborate uniforms and were often nick-named ‘Saturday Night Soldiers’. The trio pictured pre-war in their full dress uniforms are George Shorthouse  (left), an unidentified trooper, and Alfred Chambers (right).[1]

Pictured in this group in battle dress with whips and spurs (probably whilst on training in Britain), Trooper Chambers is seated left. He was one of a group of Southam Yeomen that included Sergeant William Sturley and Troopers Sheasby, Shorthouse, Plummer, Neal and Smith that set off for war in August 1914.[2] 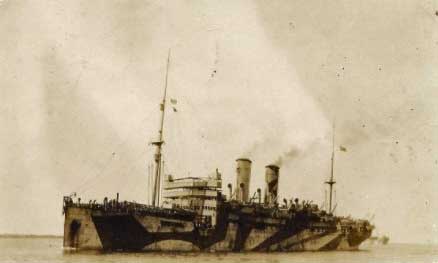 The unit sailed to Egypt in 1915; some – Plummer, Sheasby and Shorthouse – were on HMS Wayfarer which was torpedoed off the Scilly Isles. They served in Gallipoli and later in the deserts of Sinai and Palestine against the Turks.

After the Turkish surrender they were dispatched to the Western Front as machine gunners. It was in transit on board HMT Leasowe Castle (pictured right) on 26 May 1918 that they were torpedoed by UB51. Alfred Chambers escaped from HMS Leasowe Castle. Below is an eyewitness account of the evacuation of the ship:

It was a brilliant moonlight evening, with a calm sea, and from the decks every ship in the convoy and it’s protective ring of trawlers and destroyers could be seen. An obvious target for any submarines in the area.

All had gone well, but at 12.25am, about 100 miles from Alexandria, the Leasowe Castle was hit by a torpedo on the starboard side a little forward of amidships. (under the after funnel.) The engines were stopped practically at once: she remained on an even keel, settling slightly by the stern.

Troops paraded and fell in at their emergency stations immediately: rolls called. Men berthed in the lower decks had been encouraged to sleep on deck and as near as their emergency stations as far as was possible, and this was in practice on this night to roughly half to 80% of company strengths of our Battalion. The amount of movement was thus reduced and there was no confusion.

The order was given by the master of the ship to lower the boats and this was done and rafts flung overboard by the crew assisted by parties previously told off from troops on board, and largely from the Battalion.

Meanwhile the remainder of the convoy had disappeared, leaving the Japanese destroyer Katsura (also lettered R) and HM Sloop LILY to render assistance.

As soon as the first batch of boats was on the water they were ordered to be filled while the remainder were being lowered: troops going over the side down ropes and ladders. Boats were ordered by the master to pull over to the sloop and destroyer, discharge troops and pull back to the ship. This order was carried out by some boats but not by all; some boats left empty and drifting!

The total number of troops on board including officers amounted to 2,903. After all the boats had been filled and left the ship, time 0130, there were still roughly 800-1,000 men left on board. These were mostly troops stationed in the forecastle and on the starboard side; in the latter case owing to there being slightly more men that side and to some of the boats hanging outboard being smashed by columns of water from the explosion. The remainder of those on board were taken off partly by the boats which came back after discharging; partly by the sloop LILY which came along side the forecastle of the Leasowe CASTLE and made fast with ropes up to within a few seconds of the final plunge. Many men jumped in to the sea during the last few moments and were picked up from rafts, amongst those being the Battalion commander Major Sir St J Gore Bt.[3]

[3] Many eye witness accounts of the evacuation of the ship are available on line. This is taken from 1914-1918invisionzone.com