Hubert was born in Southam on 29th April 1894 to Edwin and Harriet Pearson. Edwin came from Worcestershire and his wife was from Southam. Edwin Pearson managed a grocer’s shop and was a local preacher and Hubert began an apprenticeship as a carpenter.

It is unsurprising that although the couple lived in Astwood Bank, Worcestershire at the time of their son’s death on 14 January 1916, that his name is one of those on the memorial tablet in Southam’s Congregational Church. This commemorates former members of the church and Sunday School who fell in the war. 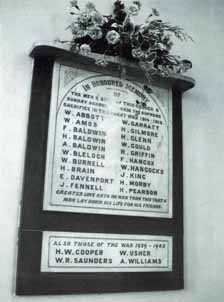 Pearson enlisted in December 1914 and served first with 2nd Coy Royal Engineers. After training at Chatham for six months he went to France in June 1915. He was wounded by shrapnel in September of that year and after a spell in hospital was sent to 82 Coy no 3 section, RE. Whilst working on breast work defences on 12th January 1916 he was wounded by gun fire and died in No 2 Clearing Hospital two days later.[1]

Sapper Pearson was buried in Merville Communal Cemetery in France the following day. His Major wrote to his parents the sort of comforting letter that had to be written to so many parents and loved ones:

‘During the time your son was with this company he showed splendid qualities as a worker and a soldier… I consider his death is a very great loss to the Company…The whole Company mourns his loss’.

Hubert Reeve Pearson is not listed on the town War Memorial in the church yard nor on the Roll of Honour erected in the south aisle in the 1930s but he is listed on the Congregational Church Memorial where his father preached when he was a boy living in Southam.