Gunner John Henry Lake King was killed on August 8th 1917 within days of his pal Tom Worrall with whom he had signed up in October 1915. Gunner King was serving with 2nd/1st (Warwick) battery of the Royal Horse Artillery. At the time of his death they were in action near Wulverghem, in the Ypres Salient, fighting alongside the 3rd Australian Division.

Henry King and by 1901 the couple were living in Park Cottages, Southam with two young children – Rose and Emily – step sisters to John Henry Lake. Later the family moved to a four-roomed house on Tattle Bank and by then two more children had arrived – Bertha and Joseph.  Young John Henry took the surname Lake, and like his stepfather he worked in the brick works.

It was after he had enlisted that he wedded Eva Gillian Tring of Steeple Barton in November 1916.  Eva may never have seen him again after the two days of leave  that soldiers were allowed after their marriage.

The Death Penny of John Henry Lake King has been donated to the Southam Heritage Collection by Bill Griffin. It was in the possession of his aunt. 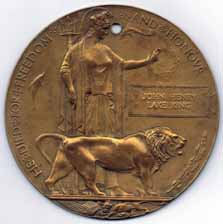 Any family connection between Bill and Alan Griffin, whose grandfather was William Henry Lake, and John Henry Lake King has not yet been established.