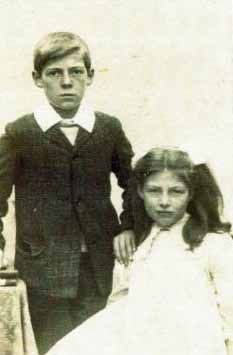 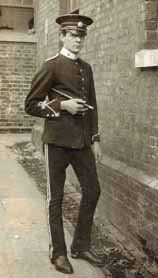 was the son of Henry and Harriet Lucy Hughes of Appendix Street. The couple experienced many sad losses in their life.

Of their eleven children, by 1911, four had died of natural causes. Soon after during WWI their son Arthur (b.1896) suffered life-changing injuries and lost a leg, whilst Sidney (b.1898) died of a war-related disease in Birmingham Southern General Hospital aged just nineteen.

This sombre little childhood picture (above left) is of eleven-year-old Sidney and his slightly younger sister Margaret in 1909.  Margaret eventually became grandmother of Jeremy and Roger Cleal who have both supplied images and information for this archive. 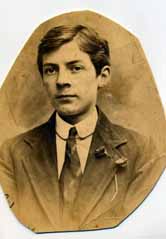 As a teenager Sidney Hughes worked as a saddler before he joined the Army in May 1916. He saw service in France with the Royal Army Service Corps as a driver.

Due to injury or disease he was returned to England but died in Birmingham of pulmonary tuberculosis on 3rd February 1918.

The Remembrance Card which parents had printed to commemorate their loved one was eventually joined by the brass plaque, colloquially known as a ‘death penny’.  Each heavy plaque was inscribed with the name of the soldier.

buried in Southam with full military honours and his grave is one of four in Southam Churchyard supported by the Commonwealth Graves Commission.