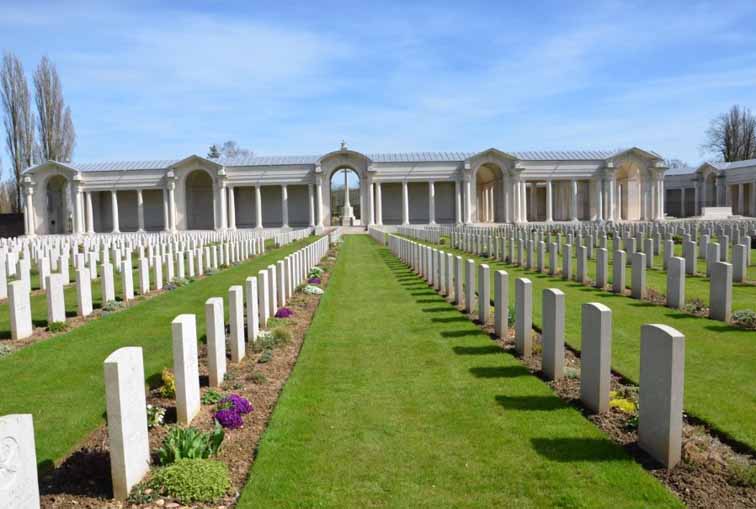 Harry Flower was killed in action on 28th April 1917 near Arras. He was serving with the labour corp in the 5th Royal Berkshire (Princess Charlotte of Wales) Regiment, who were taking part in a pre-dawn assault on German lines.

Part of a sustained attack over three weeks, 31 were killed, 143 injured and the bodies of 22 members of the Battalion were never identified and were posted ‘missing in action’.  Harry Flower was one of them.

He is commemorated on the Arras Memorial, in the Fauberg d’Amiens British Cemetery, in Arras,  France. In just over a year 34,785 lost their lives in this sector.

For giving his life in this fierce but unsuccessful action, after the war his father, John P. Flower, was entitled to a war gratuity in respect of his son of £3.3.8d.

Private Harry Flower was born in Leamington in 1887. Harry’s mother Elizabeth came from Wantage and his father John was born in Bascote, Long Itchington. Elizabeth’s  eldest child, Millicent, was born in 1876 in Long Itchington.  After their marriage in 1886 the couple lived in Leamington where three sons were born in quick succession: Harry (1887), Percy (1888) and Charles (1891). By the 1901 census the family were living in Southam where John worked as a grocer’s assistant, the boys were still at school and Millicent, now 25 years of age, worked as a milliner. Eventually all the boys followed their father into the retail trade.

But tragedy was to hit the family. Millicent died some time in the first decade of the century and then two sons, Percy and Harry died in the WWI.  The parents outlived all but one of their family. Elizbeth died in 1924 and John in 1930. By 1939 their youngest son Charles was working as an auxilary postman and lived at 2 Appendix Street with Florence Rockingham as his housekeeper.