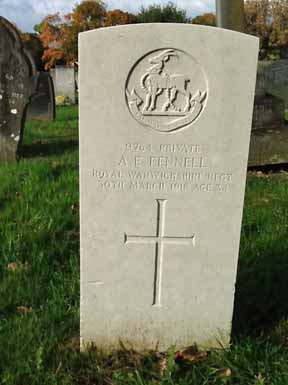 Born in 1884, Alfred was a son of Thomas and Sarah Ann Fennell.  Private Alfred Fennell’s tragic story is a complex one which can be at least partially pieced together from his military records.

Alf was a single man who had worked for Kaye and Son before he enlisted in December 1914. Private Fennell served with the Royal Warwickshire Regiment in the BEF leaving England in June 1915.  He was wounded and gassed and, after spending time in hospital in France, by the end of 1915 he was back in England at King George’s Hospital, London. He was suffering from an eye condition that caused him to stagger and be unsteady. According to his medical records he had:

‘Disability caused by Myelitis aggravated by exposure and the stress of active service… general condition poor…under any physical strain he would almost certainly break down again.’

His medical report was clear – he was unfit for work and for active service yet he was transferred to the Labour Corp where he was based in Devon defending a field battery at Renny. We lose sight of him during the following 16 months but he died in hospital in Devonport on Easter Sunday 30th March 1918.

On the following page is a copy of  duty officer W.C.W. Holmes’s report to the inquest into the unusual circumstances of his death. The report does not clarify how or why he died.  It is a surprising, shocking and painful end for a soldier whose career had been blighted by suffering and onerous hard toil.

His body was returned to Southam and he was buried on Saturday 6th April 1918 in the Churchyard with what was known as ‘full military honours’. The Southam Volunteer Training Corp under Lt Plummer provided the pall bearers and The Last Post was played by Trumpeter Cardall.

He had two brothers who were serving abroad, Henry and William Fennell. Later his three medals were sent to his mother Sarah as next of kin: 14-15 Mons Star, Victory and British medals.[1]

Officer Commanding the Natives.   On Friday afternoon last I was

in charge of the whole camp white and black.   I noticed from the

condition of certain men there was evidently a lot of

liquor about. I knew there was no spirit sold in camp so I came

to the conclusion that some liquor had been washed ashore.   I went

with quite a number of men around it.   I examined the cask and

taken up to the camp where I had it put under lock and key.   One

liquor.   I did not see the deceased that afternoon but on the next

morning when he was being examined by the Medical Officer.   He

was more of less unconscious and appeared to be in great pain.

at one time.   I understood him to have been married with three

children.   The Medical Officer ordered his removal to the Military

Hospital and I saw him leave in an ambulance.   I made enquiries at the

the liquor it was generally understood that he had taken a little.

there were in different stages of intoxication. It was a 36 gallon

cask so I understand. There were no marks on the cask.