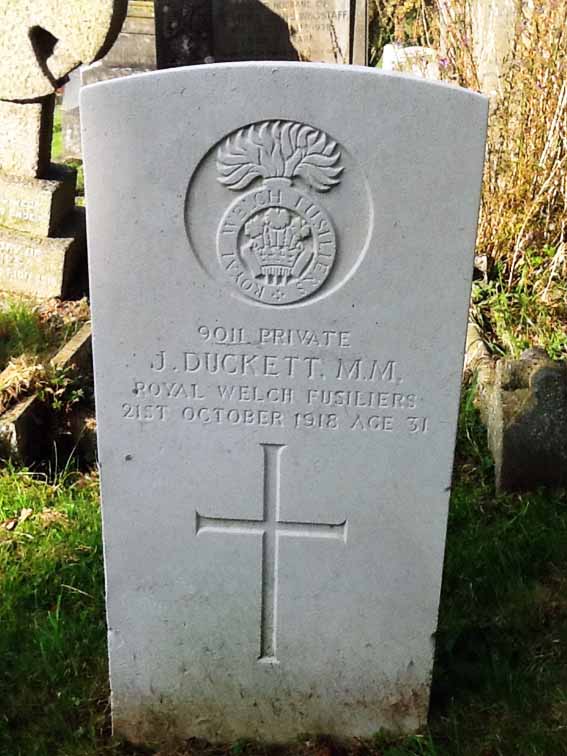 John was son of Harry and Martha Duckett of Rose Cottage Leamington Road. On the 1901 census, aged 13 years, he is listed as a ‘plough boy’ and his father a ‘horse keeper’. He served in the military being awarded a good conduct badge in 1908  and as a reservist was called up immediately war broke out in August 1914.

John served with distinction in the Royal Welsh Fusiliers being awarded the Military Medal for his actions at High Wood in the summer of 1916. As a result of injuries sustained in the action he was invalided home from Rouen Hospital, discharged from the army in February 1917 and was awarded

Silver Badge (141633).  Despite his injuries and the effects of shell shock he might have hoped for a rosy future for he married Annie Wood who had been one of his nurses whilst in military hospital.

Tragically, in October 1918, he died of influenza, one of twenty Southam folk who died in the epidemic that month. The Parish magazine described his suffering from frequent bouts of illness but his going bravely and cheerfully to work at Kaye and Co. cement works. He was buried at Southam with full military honours on 26th October 1918. His former hospital colleagues were pall bearers.

Pictured here is his grave which is maintained by CWGC, in Southam Church yard.