Born in Southam in 1892, Arthur was the youngest son of John and Julia Duckett. His early years were troubled by the illness and death of his mother in the County Asylum.

In 1882 Southam-born John Duckett, a widower in his late 50s, married Julia Whitmore a spinster of 34 years from Hereford. They were married in Leamington and unable to write, John made his mark on his wedding certificate.   Arthur John (actually baptised John Arthur) was the youngest of the family and his mother died when he was six years old after a short spell in the Asylum.  By the 1901 census his father aged 70 years remained a widower, was still working as a road man, and young Arthur and the family were cared for by a widowed elderly aunt.  Not surprisingly Arthur eventually moved out and lived in Whitnash working in Leamington as a baker before enlisting. 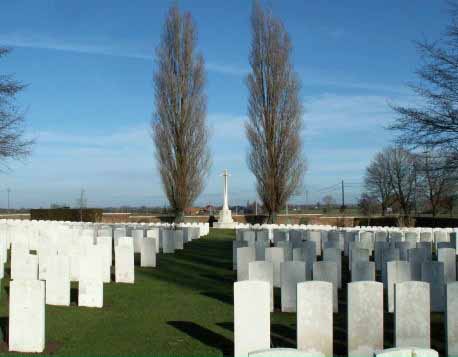 In October 1917 Arthur was serving with 11th Battalion Royal Warwicks, part of the 37th Division. The brigade was in support in the Tower Hamlets sector and was under intense bombardment for twenty-four hours. According to the war diaries there had been great difficulty with transport and with carrying rations ‘on account of the intense darkness, damage of tracks and heavy shelling’.

The company were relieved after five days and spent time clearing up and having baths. They paraded, received their pay, and attended Divine Service. But during the action 75 were wounded and four were noted as ‘missing’ and 33 were killed. One of the dead was Arthur Duckett.  He died on 9th October 1917.

Private Arthur John Duckett is buried at Voormezele Enclosures (pictured left) a cemetery near Ypres in Belgium.  He is also commemorated on the Southam Memorial.