John Checkley was the first Southam soldier to die in World War One. He is buried with other men of his Regiment, 1st Royal Warwicks, in The Strand Military Cemetery, near to Ypres, in Belgium. The Cemetery is named ‘The Strand’ after a trench that led into Ploegsteert Wood, or ‘Plug Street’ as it was named by the men who served there.

Born in Stockton in 1882, John’s parents Charles and Elizabeth were both local and had settled in Stockton where Charles was a labourer at the Greaves Works. They had nine children but only four were living when the 1911 census found them at Abbey Row, Southam and by then Charles and Elizabeth, in their late sixties, were living on the parish.  John, like his father a quarry labourer, and his young wife Beatrice from Brierley Hill in Staffordshire, lived with them.

John was on the reserve list and left with the British Expeditionary Force in August 1914.  The 1st Battalion of the Royal Warwickshire Regiment were part of the 10th Brigade of the 4th Division. They landed in France on 22nd August 1914.

By late October 1914, the Royal Warwicks were in the trenches, in heavy rain near to the village of Houpelines and under heavy artillery and sniper fire. The snipers on both sides were exceptional marksmen. They aimed at the head and the shot was invariably fatal. This was the fate that befell Private Checkley on 27th October 1914. 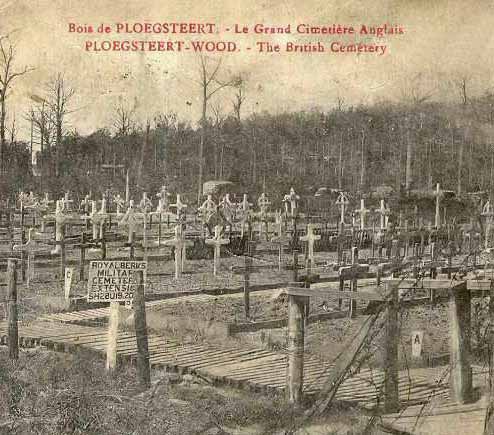 It was early days in the conflict and Major V.R. Piggott, commanding the 1st Royal Warwicks, made notes at the end of his October report.  His suggestions give us a hint as of life as it was for the soldiers. Piggott suggested ‘Bully Beef’ be in tins of 1lb maximum for larger tins were heavy to carry and there was much waste.  He also stated ‘We require more telephones…between Regimental Headquarters and each company…especially in the trenches…it is most difficult to communicate with the forward trenches’.

This post card shows what cemeteries looked like early in the war. This is Ploegsteert Wood where Private Checkley was buried.