Three of the four children of George and Ada Bull, served in WWI. They were George Riley Bull (b.1893), John Edward Bull (b. 1895), and the eldest Ida Bull (b.1889) who served in France as a nurse. The family story is a complex, courageous and a tragic one.

George senior hailed from Ufton and his wife Ada from Southam.  He worked as a grocer’s assistant moving quite often, presumably for work. Their daughters Ida and Nellie were born in Banbury, and sons George and John were born whilst the family lived in Farm Street, Harbury. In the late 1890s the family settled in Daventry Street, Southam. George by then was a baker. Relatives owned a shop in Market Hill on the corner of Chickabiddy Lane and they were also related to the Flowers of Bascote Locks for George senior was brother of Annie Bull, who married lock-keeper Thomas Flower. 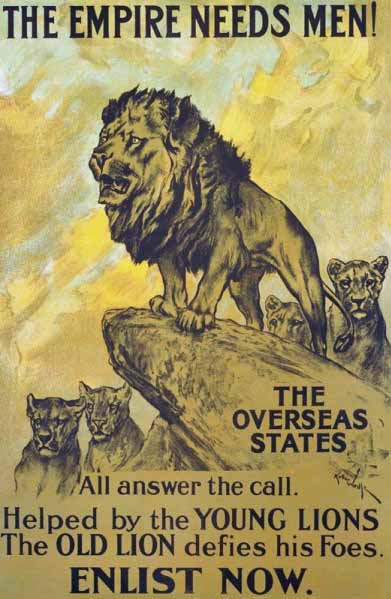 George’s wife Ada died aged just 42 years. She was buried in Southam church yard on 12 June 1903. George, left to bring up a family of four – Ida (15), Nellie (13), George (10) and John (8) – took the dramatic step of moving the whole family to Canada. They sailed from Liverpool to Quebec in 1904 and after this we lose sight of them for a little while.

George (junior) was aged 21, and his brother John 19, when they both joined up on the same day in September 1914 at Valcartier, Ontario and both served in the 4th Central Battalion of the Canadian Infantry. Both were fit young men. George stood five feet eight inches tall with blue eyes and fair light brown hair. He described himself as a labourer.  By then he was patriotic for Canada – he had a Canadian flag tattooed on his right arm, and there was pressure to enlist as this poster illustrates.[1]  Like his brother whilst abroad he sent money home regularly naming their sisters as next of kin.

Sergeant George R. Bull (11459) survived longer than his brother. In 1915 he had a week’s leave in England. He received a shell wound in the shoulder in 1916 and was hospitalised in Wimereux and then brought to Shorncliffe in Kent finally ending up in the Royal Victoria Folkestone where his notes state the wound was still septic-‘formentations’. On discharge he had one month physical training before returning to the war zone. During the next year he was promoted twice being awarded a ‘good conduct medal’ and promoted to Sergeant and he was awarded the Military Medal (Gazetted 17th July 1917).

The citation for the award reads as follows “On May 3rd, 1917, the Platoon to which Cpl. Bull belongs, along with another Platoon of the same Company, took up a position near Fresnoy, immediately after its capture. They were exposed to heavy enemy artillery and machine gun fire, and all the N.C.O.’s in the two platoons became casualties, except Cpl. Bull. He continued to perform his duties with the greatest devotion, exposing himself fearlessly in doing so. His coolness and energy were an example and inspiration to the men, and he rendered most valuable assistance to the sole remaining officer in charge of these Platoons.”

George was in the thick of action on many occasions and survived but on 8th August 1918 the Canadian Corps took part in the Battle of Amiens and the official war diary records the dire intensity of the battle that day: ‘Many gallant acts were performed by all ranks in face of extremely severe machine gun fire’. Casualties were high and one of those killed was George Bull. He is buried along with dozens more Canadian service men in Caix British Cemetery on the Somme, in France.