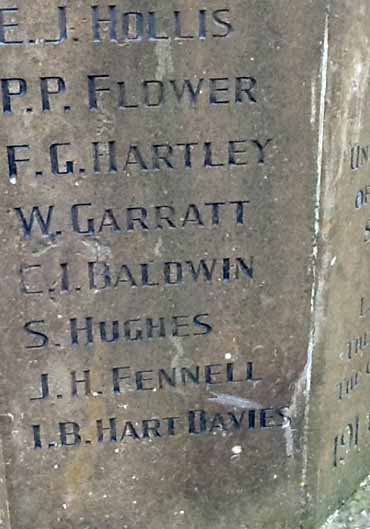 Charles Baldwin was the last man to have his name included on the town WWI Memorial.  He served in the Royal Army Service Corp (RASC) and he was older than the other Baldwins who served, being in his mid to late thirties during his service. He died of a war-affected condition two years after the armistice.

Before the war Charles, like his father and brothers, worked in the lime kilns.  After the war, at the time of his death in 1920, Charles, by then a married man, was working at Rugby School as a caretaker. He and his wife Sarah had married fairly recently and they were living in Rugby, near the school in Elsee Road, probably in tied accommodation.

He was just thirty-nine years old when he died of heart disease. Sarah, his widow, arranged for his body to be returned to Southam where he is buried in the church yard.