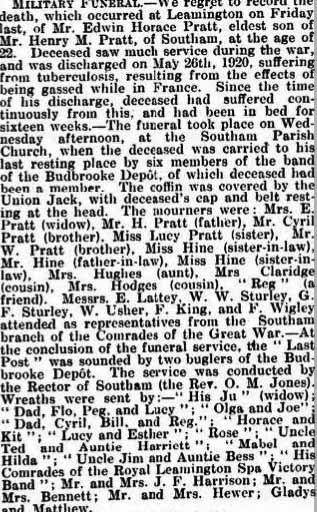 Edwin Pratt was aged twenty-two when he died a painful death in Leamington after an extended illness. He was gassed serving with Royal Warwickshire Regiment in France. He suffered constantly after his discharge and his death in March 1921 was the result of Tuberculosis.

He was born in Southam the son of Henry and Rose Hannah Pratt. His mother died when he was eight years old. He was the eldest of four children.

He was discharged in May 1920 and around this time he married. His bride of one year was the principal mourner at the funeral in Southam together with his father, sister and two brothers, in-laws and extended family.

He was something of a musician for as a married man living in Leamington he had been associated with the Royal Leamington Spa Victory Band who sent a wreath to his funeral. His coffin was carried by six members of the band of the Budbrooke Depot of the RWR and their buglers played the Last Post at the conclusion of the service.

The association ‘Southam Comrades at War’ (not yet amalgamated into the Royal British Legion) was represented by Capt. Eric Lattey M.C., W.W. Sturley, G. F. Sturley, W. Usher, F. King and F. Wigley. His cap and belt were placed over the Union Jack on his coffin.

Edwin Horace Pratt rests in Southam Churchyard but it seems sad that a young man born and bred in the town, who died of a wound-related illness so soon after war ended, is not commemorated on the War Memorial as others are so that future generations may know of the contribution of this young soldier.