Ida Bull was born in Banbury in 1889, and lived in Southam before emigrating to Canada with 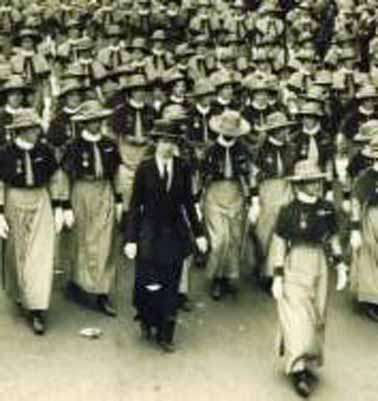 her father George and three siblings in 1904. By 1911 George was living in Ontario with his younger daughter Nellie (19) and teenage sons whilst Ida (21) had left home and was working in the Royal Victoria Hospital, Ontario, as a nurse where she lived in the nurse’s home.

George would have likely been very pleased his elder daughter Ida was undergoing nurse training but he did not live to know she returned to Europe to serve in the war. Nor did George live to know the terrible news that both his sons died in the conflict in Europe.

More than 3,000 women from Canada served in WW1 in the Canadian Army Medical Corp (CAMC) and over 2,500 came to Europe. They were an entirely professionally-trained group (as opposed to Canadian VADs who also came) but all were volunteers.  Ida had been a nurse for at least three years and was 25 years old when war broke out. According to Canadian Government Archives, Ida served with the Queen Alexandra’s Imperial Military Nursing Service (a group is pictured here).

When serving in Mesopotamia Nurse Bull was decorated. Her name appears, after the war, in Canadian Government remuneration records. She travelled back to Canada on the troopship SS Tyrolia in 1919.

Ida kept in touch with Southam folk as these two snapshots in the Southam Heritage Collection show. She is pictured, in 1943, wearing the uniform of the Canadian based Victorian Order of Nurses uniform and carrying her nurse’s bag, and in her retirement in 1965.