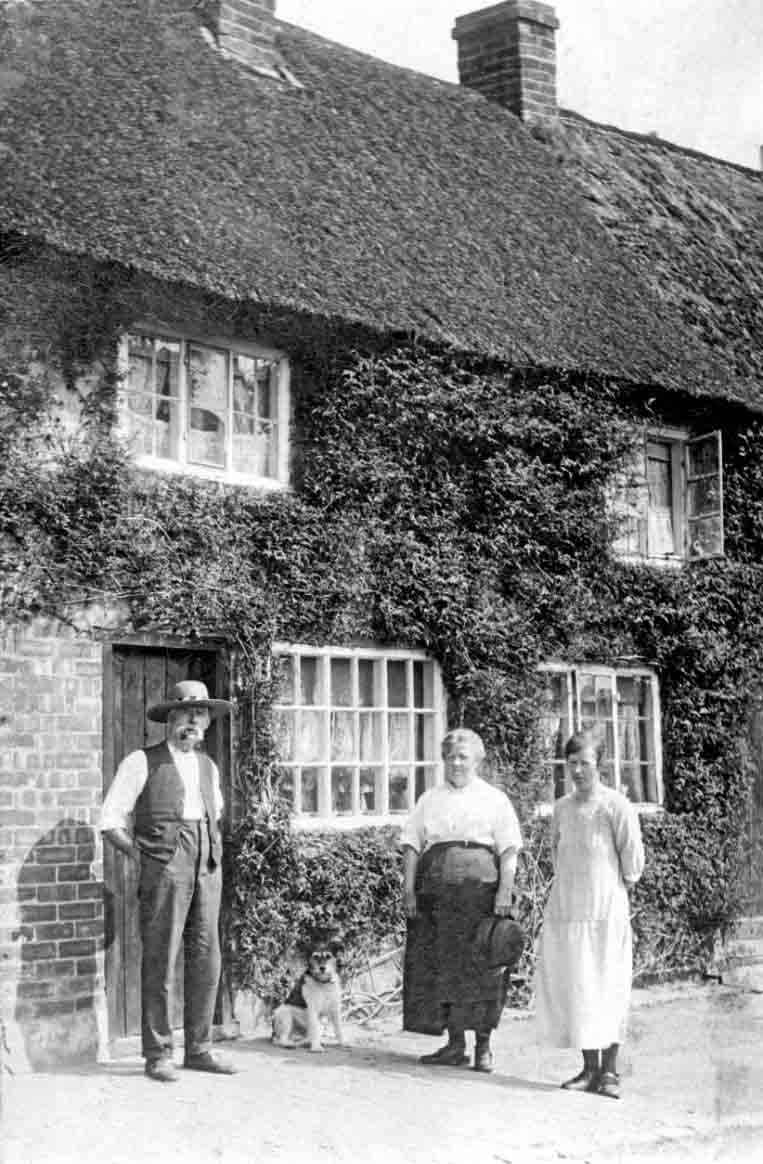 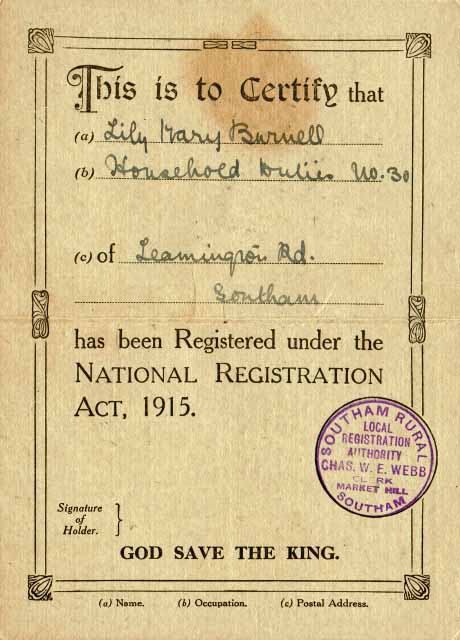 hospital opened in 1917. Born in 1897, Lily was the youngest of the seven children of Omer and Harriet Burnell. Omer was a postman and volunteer fire man. With three working lads (two quarry men and one a butcher’s assistant), living at home, Lily’s job on leaving school was ‘household duties’ as stated on her National Registration card. There was constant house-work and cleaning, cooking and baking, washing and ironing, animals to be fed, and an extensive plot to be tended. Water came both from a well and also a tap across the yard; cottage life was not easy. She does not look over excited by her lot in the teenage picture taken outside the family cottage on Leamington Road with her mum and dad.

In the group picture of VADs Lily looks more confident and very smart in her uniform standing third from the left on the back row. Scarcely out of school when war broke out these young girls trained in 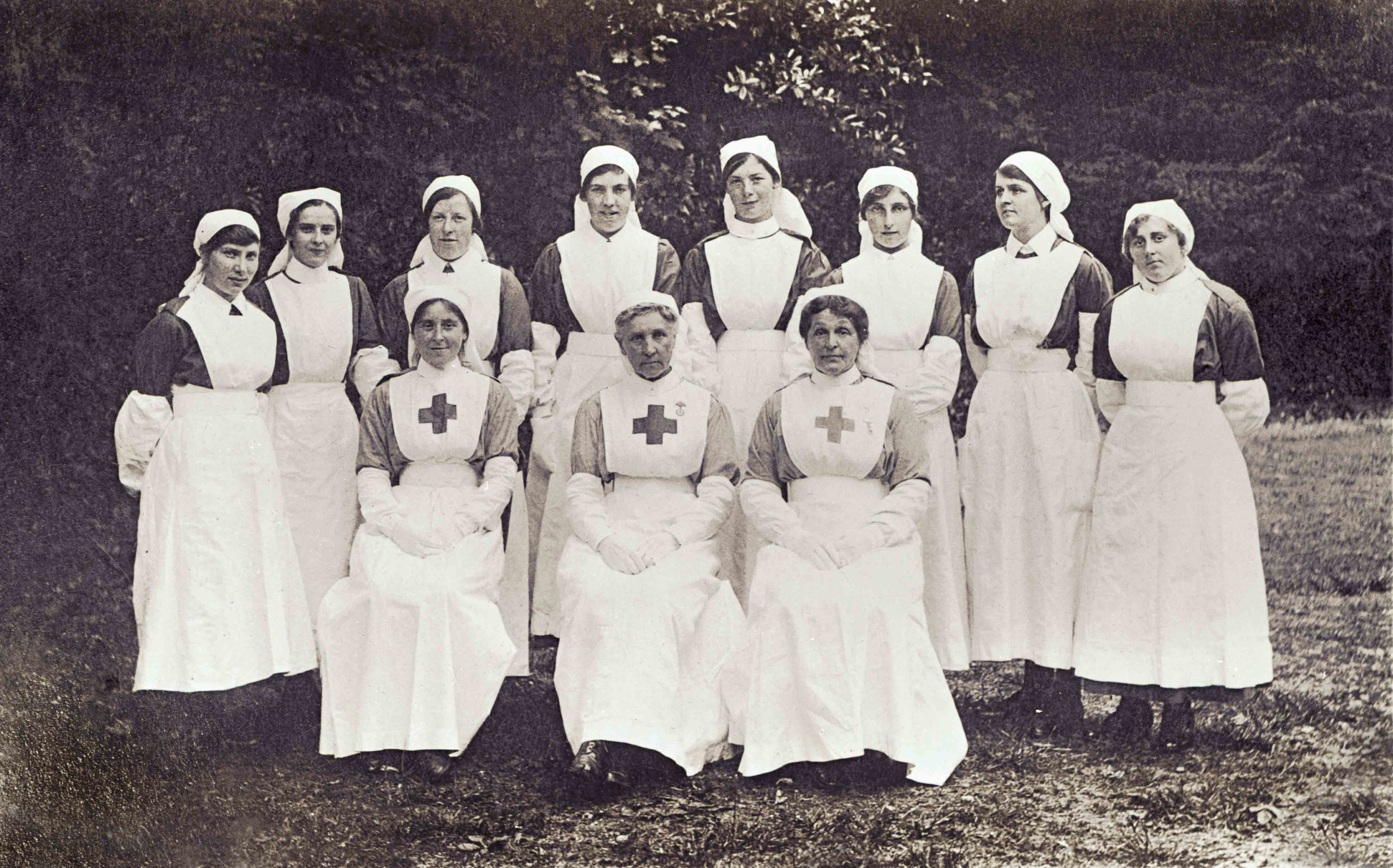 Autumn 1917 and they had not yet got their crosses and badges. The older nurses seated, trained in 1914 and all are wearing red crosses and badges showing their qualifications. The term ‘nurse’ was used loosely at this time and the VADs, full or part time, new or qualified, were involved in cooking, scrubbing floors and cleaning rooms, laundry and delousing uniforms in addition to the more straight forward nursing tasks and basic ward duties such as emptying pots and bed pans.

Work at the hospital was unpaid so Lily’s family had to make sacrifices sparing her from the tasks in the home. For a young woman it was a challenge, something totally new and perhaps an adventure to don a uniform and join her ex-school pals in the demanding regime at the hospital. Every six weeks or so she would have seen a new intake of injured men – lonely, confused or simply grateful to be out of the sound of gun fire – arrive for rehabilitation and treatment. The most severe medical cases did not come to the auxiliary hospitals, but nevertheless she would have nursed amputees, head injuries, and helped care for men whose minds were never fully to recover.

There was constant worry too at home when raw notices came telling of the injuries of her brothers in battle. One brother, Victor, was injured to the head and a piece of shrapnel came out from the back of his neck long after he was demobilised.

After the war Lily returned to looking after the family at home. She married a Southam man, Jack Tyler, in 1927. Both aged thirty, they lived with her parents in the two jasmine-clad thatched cottages which, at some point were knocked into one. Here their two daughters were born and raised.

Lily’s husband Jack was a carrier and later a factory worker. But Jack had been injured and gassed in the war and his 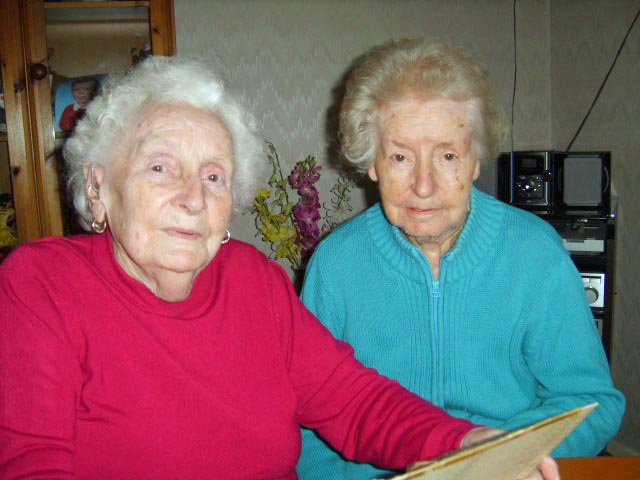 Jack and Lily are both remembered with pride by Mary and Cissie (pictured here). Jack was a soldier mentioned in despatches for bravery under fire. Their mum Lily too was made of stern stuff and whilst both her daughters marvel that she never spoke of her contribution to the war, they remember that she could be quite adamant about other matters! Jack died aged sixty four and Lily lived to be eighty. She took many happy holidays and gregariously enjoyed the company of relations and friends.